Medal of Honor Values in the Everyday Life 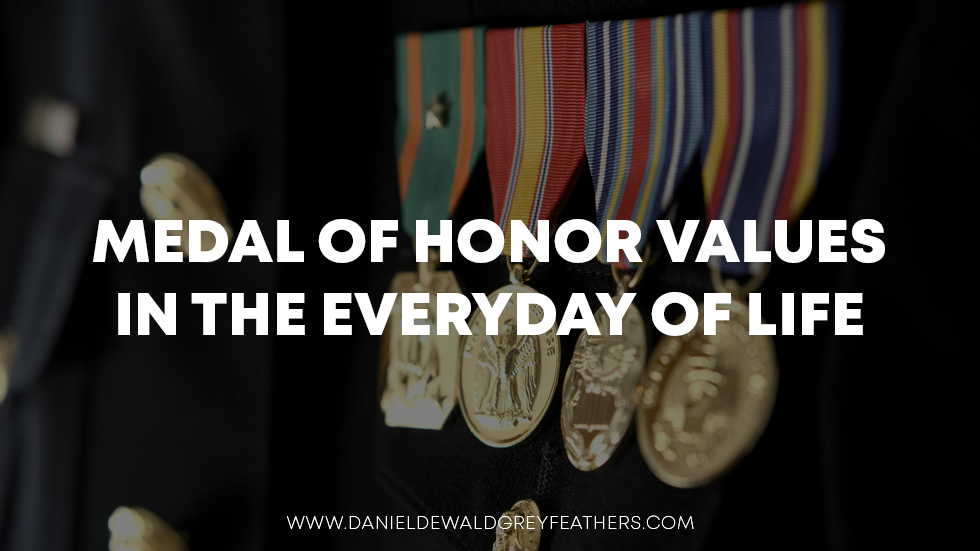 Courage is the first and foremost value instilled in the armed service. Not everybody can brave harsh conditions or face uncertainty and the unknown. It takes courage to face great fear and adversity. Courage is also shown when people are racked with difficult decisions. As such, courage is one value that men and women live with to tackle daily life. After all, it takes courage just to take outside of one’s own home.

Sacrifice is defined as “an act of giving up something valued for the sake of something else regarded as so more important.” It is the selfless act of putting others’ needs in front of our own. This is a value that most people learn early in their life, but due to the inherent selfishness of man and the value of self-preservation, very few are able to master it. The practice of delayed gratification or putting up with minor or even major discomfort for the sake of others is one way to show this in daily life.

Patriotism is described as the devotion to one’s country and the enthusiastic support for it. An individual can show his or her patriotism by following the values of what makes their country great. Put bluntly, patriotism is one’s love for their country. That said, when trying to be patriotic, it is a good idea not to venture into jingoism and chauvinism. Such concepts are not values vices that do more harm than good for the image of one’s country.

Close to patriotism is citizenship. It means being involved in the community, as well as respecting others. It is shown through showing compassion for one’s fellowmen and taking responsibility for the service of the country. No one had said more about citizenship than United States President John F Kennedy when he told the American people that it is not about what the country can do for them but what they can do for their country.

Honesty is the best policy. Being a person with great integrity means living an honest life with a good character. Integrity also follows when people have their own moral backbone. Integrity can be followed by practicing a personal code of conduct and ethics. This code could come from the different aspects of one’s life. It could come from lessons learned in a book or in childhood. It could be from family tradition or one’s beliefs. Wherever the source, following a code of conduct can do great things for one’s personal character. Doing so will help improve not only one’s personal life but that of others.

Sure, the Medal of Honor may only be awarded by armed forces members. However, the values associated with it are not only limited to these very esteemed people. It does not take a great war to show one’s character. Even the daily lives of daily men are can be a source of inspiration to many people. Even the average citizen can contribute to the betterment of the country.