Amore Patriae: The US 12th Infantry 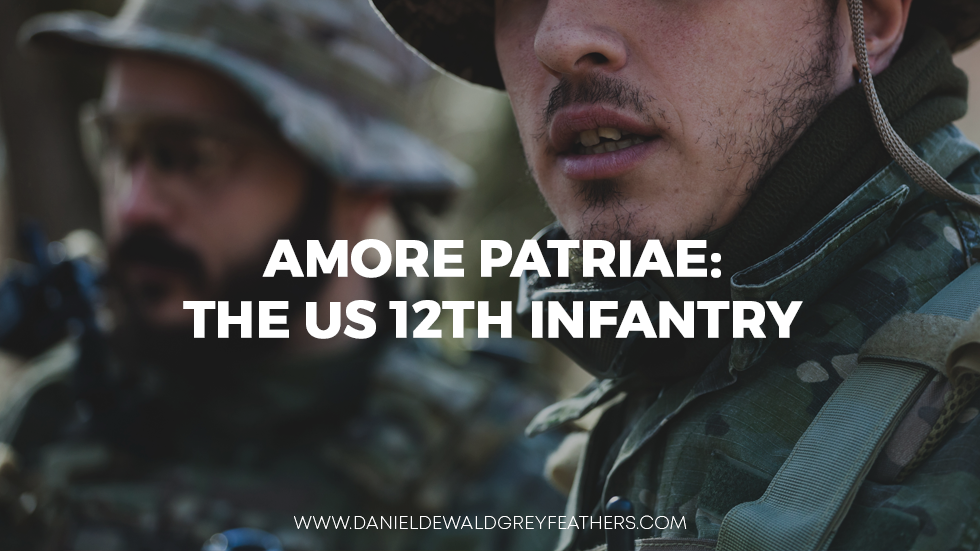 The might of the United States Military is well known throughout the world. After all, they were the military force that dealt the decisive blow to end the Second World War. And despite a lot of political controversies, most countries consider them the main peacekeeping force all over the world. It is no surprise then that the United States of America tops China, Russia, Germany, and the United Kingdom to become the world’s foremost global superpower.

In the storied history of this military force lies the 12th Infantry Regiment of the United States Army. Inspired by their motto of Ducti Amore Patriae, which means having been “Led by Love of Country,” has participated in multiple wars. The 12th Infantry has been there from the very beginning of the US Civil war to the Global War on Terrorism. Time and time again, this regiment has followed its motto and showed its patriotism. One account of this daring patriotism during the Vietnam War can be read in Daniel M. Dewald’s book about the 3rd Battalion 12th Infantry 4th Division

Generally speaking, the 12th Infantry regiment has been an active infantry regiment of the United States Army since 1861. It finds its headquarters in Fort Carson, located south of Colorado Springs in Colorado, United States. It adheres to the motto of Ducti Amore Patriae, which in English means Having Been Led by Love of Country. In its over 160-year history, it has fought in seven wars, from the United States Civil War to the Global War on Terrorism, while earning multiple awards along the way. Its 1st and 2nd Battalions are nicknamed the “Red Warriors” and the “Lethal Warriors,” respectively.

The 12 Infantry Coat of Arms is in the shape of a French style shield. The lower half of the field is colored blue which symbolizes the regiment’s nature of being an infantry. A wigwam can be found in the middle of the shield to commemorate the regiment’s participation in the Indian Campaigns. This is surrounded by two Moline crosses representing the iron fastening of a millstone. These crosses symbolize the losses the unit sustained during its first engagement at Gaines’ Mill, Virginia, during the American Civil War.

Meanwhile, a chief covers the top part of the shield, which is in Spanish colors yellow and red as well as red and blue colors also come from the colors of the Philippine Katipunan. These symbols denote the regiment’s participation during the War with Spain and the Philippine Insurrection. The field and the chief are separated by an embattled partition line that represents the capture of the blockhouse at El Caney, Cuba, during the Spanish-American war. Above this line is a sea lion which is from the arms of the Philippines. Finally, the coat of arms is topped by a crest in Spanish color, which celebrates the capture of the Spanish flag at El Caney during the Spanish-American War.

The regiment was first constituted in the Regular less than a month after the beginning of the Civil War. On October 20, 1861, it was organized at Fort Hamilton, New York. Along with the Army of the Potomac, it fought a total of twelve campaigns. During one of these campaigns, specifically the Peninsula Campaign, the regiment distinguished itself on its first foray during the Battle of Gaines’ Mill. Unfortunately, the regiment suffered heavy casualties, amounting to the loss of fifty percent of its total force.

The regiment also participated in three campaigns during the Indian wars. Throughout the war, the regiment fought the Modoc tribe in California, the Bannocks in the Northwest, and lastly, the Sioux at Pine Ridge, South Dakota. During these conflicts, six soldiers performed acts deemed worthy of the Medal of Honor.

Right at the heels of the Battle of Manila, the regiment was then deployed to fight the Philippine Army during the Philippine-American War. They fought in the Malolos, Tarlac, and Luzon campaigns during 1899. After the war, the 12th served as garrison troops in the country and stayed there until 1912.

The regiment was not part of significant campaigns in the first World War. Instead, they stayed in the United States and served as garrison troops.

The Second World War saw the 12th Infantry reorganized and motorized. The regiment, along with the whole 4th Infantry Batallion, arrived in England to prepare for D-Day, where it saw its first battle. They were part of the spearhead assault landing on Utah Beach. The regiment was part of the group that fought the Germans in Operation Lüttich. Through the war, they fought in five European campaigns in four different countries. One of note was during the Battle of the Bulge, where the infantry was awarded the Presidential Unit Citation.

Once again, the regiment did not see significant battle during this time due to the Army deciding that the tactical infantry Division was obsolete in the era of atomic weapons.

The regiment once again saw battle during Vietnam, where three 12th Infantry battalions were deployed to South Vietnam with the 4th Division. Throughout the conflict, the infantry saw the most battles ever since its activation during the Civil War. Some accounts of their time in this conflict can be found in Grey Feathers. The regiment received numerous awards for its services during this time.

Post-Vietnam and War on Terror

The regiment remains active until the present day. They were significant forces during the US military operations in Operation Sea Signal, Operation Iraqi Freedom, and Operation Enduring Freedom

Throughout its existence, The 12th Infantry has received multiple rewards. Among them are 19 Presidential Unit Citations and five Valorous Unit Awards.